British arts administrator and journalist John Tusa’s new On Board: The Insider’s Guide to Surviving Life in the Boardroom includes some helpful material about nonprofit boards in particular. In its second chapter, Tuso describes his experience serving on the board of the Minnesota-based American Public Radio (APR), which he joined in 1991. 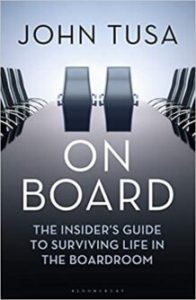 “In the 1990s, American Public Radio grew from 19 full-time employees and some $3 million in revenues to more than 40 full-time employees and $20 million in revenues,” according to an excerpt of On Board last week in ProMarket, a publication of the Stigler Center at The University of Chicago Booth School of Business. APR internationalized “its programming and purpose by changing its name to Public Radio International (PRI),” and it became “a ‘publisher’ of programming, not just a distributor. Funds were raised to initiate ground-breaking programs such as The World (international news) in cooperation with BBC World Service” and the weekly This American Life program, among others.

“I do not believe that the transformation of a tiny Midwestern radio network into a major player on the US national media scene would have happened without a serious, rigorous foundation in the way it was governed,” Tosu writes. “Governance supported and supervised management, it was as simple as that. It needed thought, belief and work and was striking to witness in action.”

The network’s first chairman, Ken Dayton, had gained a national reputation for his successful nonprofit leadership—along with his previous, also-successful leadership of the Dayton Hudson shopping stores—and he was willing to share his thoughts about it with others, as he did in his 1987 “Governance is Governance” paper from Independent Sector and up until he died in 2003.

“Dayton warned of deficiencies in not-for-profit boards, where either the paid executive surrendered its powers to the chair, or where chairs and boards, volunteers one and all, gladly usurped executive responsibilities,” writes Tuso of Dayton, who also served on the boards of the Rockefeller and Mayo Foundations and the J. Paul Getty Trust. Both of those deficiencies do seem familiar.

“Any institution—for-profit or not-for-profit—that has an all-powerful Chair or a weak CEO,” Dayton notes in “Governance is Governance,” “is an institution in trouble or surely is one headed for trouble.” That’s recognizable, yes.

A Warning, and an Exhortation

“Dayton had a special warning for executives in the non-profit sector,” though—the too many of them “who said they didn’t want a board ‘looking over my shoulder, second-guessing me, reviewing my performance,’” according to Tuso in On Board. “To any such executive, [Dayton] advised, ‘If you really want to build that institution into a dynamic force in society, they can do it so much more effectively if you have a dynamic, effective board.’ Supervision, review and challenge were essential elements in the path to good performance.”

And Dayton had an exhortation for nonprofit directors. “[W]hen we sign on as trustees,” he notes in “Governance is Governance,”

we also sign on as volunteers agreeing in essence to undertake any assignment reasonably asked of us. That’s the only difference between a corporate board and a not-for-profit board. The corporate board will usually only be asked to undertake this additional role when the corporation is in real trouble. But our kinds of boards are asked to play this double role all the time. Individuals should not be invited to serve on such a board unless they are totally willing to undertake the volunteer side as well as the governance side of a trustee’s responsibility. So a CEO is a CEO, but a trustee is a governor and a volunteer.

Overall, “Ken Dayton’s observations have a pleasing directness and a deceptive simplicity,” Tuso concludes. “His advice has no theory in it, no abstractions, just an attractive clarity of thought which should compel acceptance. Yet, over the years, the evidence is that even with the best of advice available to them, many American [nonprofit] boards still struggle to put it into practice.”

Abstractless clarity of thought, to make some familiar nonprofit-governance deficiencies less so.

(Hat tip to Neil Hrab for bringing the book excerpt to my attention.)

This article first appeared in the Giving Review on March 8, 2021.